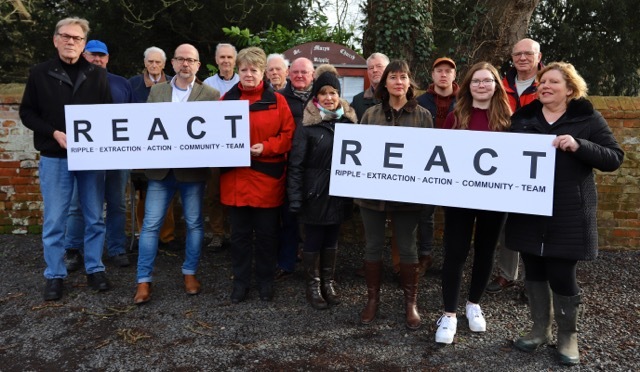 PLANS to dig up more than 1.5 million tons of gravel from a quarry have been met with opposition from villagers who are worried about its effect on their lives.

An application has been submitted to Worcestershire County Council by M C Cullimore (Gravels) Ltd asking for permission to extract sand and gravel from Bow Farm in Ripple, near Upton Upon Severn.

The plans would see the 1.5 million tons of material extracted over the next seven years and according to the application, the land will be restored to wetlands, nature conservation and agriculture once work is finished.

The environmental statement attached to the plans says: “The nature conservation area would comprise a mosaic of wetland grassland, scrapes and shallows, woodland and open water.

“The proposed scheme would also result in an additional 700 metres of hedgerow planting compared with current baseline conditions.”

A spokesman for Ripple Extraction Action Community Team (REACT), which is a group of residents opposed to the dig, said: “The main areas of concern of the group, as well as the increased risk of flooding, are the inevitable dust pollution that will result in excavating an area of that size as well as the noise that will result from the proposed construction of a processing plant.

“REACT are also concerned about the impact of the Cullimores’ lorries on local traffic throughout the excavation period.”

District councillor Jeremy Owenson, who represents Ripple, said: “My view is that the views of local residents are often ignored, and it is important that when companies can throw thousands of pounds at making a case for doing massive gravel extraction, fair weight is given to the local residents who perhaps don’t have the money or the lawyers to throw at the case.

“I am also concerned that not enough attention is paid to what happens once the gravel has been extracted.

“I would love developers to hand the land back to the communities that have suffered, once the extraction is finished.

“This would allow residents to develop the land for the public good, through parks, fishing lakes, or indeed the proposed rowing lake in Upton.”

The full planning application can be viewed online at www.worcestershire.gov.uk/eplanning using the application reference: 19/000048/CM.