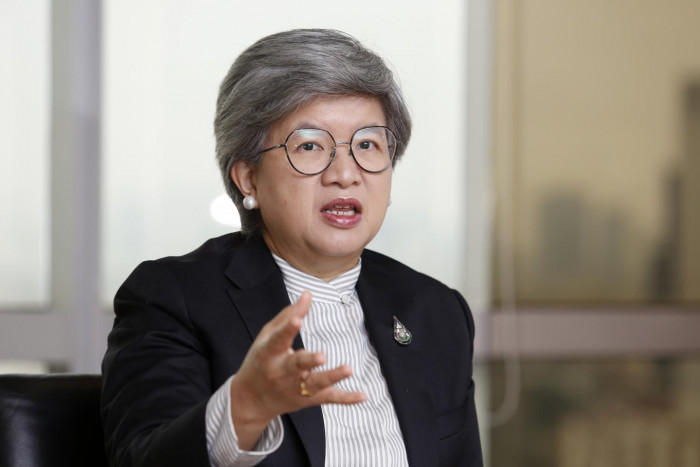 For the entirety of its 29 years in existence, Thailand’s Securities and Exchange Commission (SEC) has been haunted by the label paper tiger, lacking the authority to actually enforce the rules it writes regarding capital markets, stocks and digital assets.

But according to Ruenvadee Suwanmongkol, the SEC’s secretary-general, the popular perception is not always the reality, noting that the organisation has not received credit for its many regulatory accomplishments.

“If we are truly a paper tiger, then why have we been able to overcome so many major challenges, just within my term?” she said.

Ms Ruenvadee stressed that detecting and investigating violators of the rules and those exploiting small investors is no easy task, and this should not overshadow the SEC’s progress in formulating a well-balanced regulatory framework.

She said the SEC is preparing to amend the Securities Act to seek greater investigative authority for when violations take place as well as to enhance the regulator’s enforcement efficiency.

However, recent pronouncements by the SEC have raised concerns the organisation could be seeking to prove its strength not by prosecuting cases relating to powerful corporations and high net worth investors, but by gatekeeping new markets like cryptocurrencies to keep out those with low and middle incomes.

The rapid pace of technological change has brought with it a wave of new financial products, and the SEC has had to move quickly to provide rules and investor protection in the field of cryptocurrency trading and other digital assets. 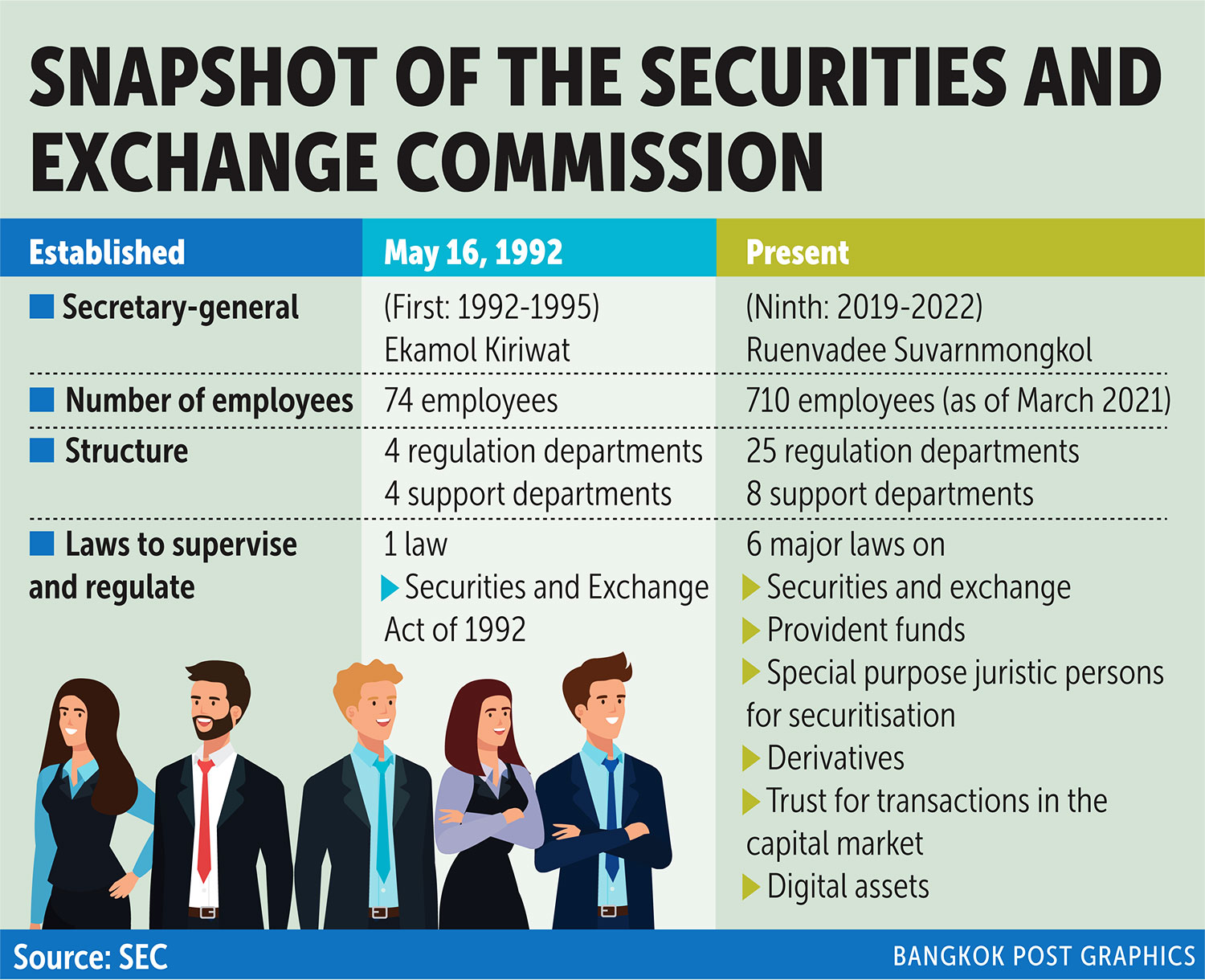 An early challenge in Ms Ruenvadee’s tenure as head of the SEC was the sudden shutdown of BX, formerly the country’s largest cryptocurrency exchange with over 200,000 registered accounts.

The SEC formed a war room of 10 staff members to deal with angry BX customers who had just lost their investments and were not receiving any answers from the company.

The digital asset law had only been implemented 10 months prior to this event and this was the first case to test its effectiveness in the real world.

The situation ended up providing more of a learning experience than a win for the aggrieved investors.

Some BX users lost their money because they were storing it in cryptowallets owned by BX, and the company did not have the key to open these wallets.

In the end these investors lost their digital assets, but the snafu inspired additional regulations requiring third-party firms to operate cryptowallets in some cases, as well as other tweaks to prevent a similar situation from happening again.

“Although it’s like building a fence around the paddock after the cows have disappeared, it’s better than doing nothing,” she said.

A few months later the pandemic spread across the world, bringing with it massive market volatility, destabilising mutual funds and spurring the SEC to work overtime to roll out new measures to calm the markets, all while taking additional measures for social distancing in its own office.

Once the initial shock of the new lifestyle set in, stock prices began to recover, although the SET Index has yet to reach pre-pandemic levels.

The relative tranquility of the SET has provided some breathing space for the SEC to once again focus its attention on cryptocurrencies, which have recently attracted herds of young, less experienced investors seeking a cut of the massive gains bitcoin and other cryptocurrencies tallied this year.

The SEC has stirred controversy this year following the release of a draft list of qualifications that would impose steep financial requirements for Thais wishing to buy and sell cryptocurrencies. The list includes an income requirement of 1 million baht per year or net worth of 10 million baht.

Although the qualifications are merely an opening suggestion for public hearings scheduled for later this month, it reflects a paternalistic stance towards cryptocurrency — that it is better to prevent young people from crypto trading altogether than to let them take on the high risk and have some lose everything.

The high income requirement has drawn swarms of angry responses on social media, as 1 million baht per year is well above the country’s median income, meaning the majority of Thais could not buy and sell a technology that was created with the intention of democratising financial transactions.

One staff member at the SEC told the Bangkok Post many people on the staff are hesitant about launching the online public hearing because they expect vitriol from angry crypto traders that fear losing their right to trade.

“We feel bad about the criticism, but Ms Ruenvadee has worked to soothe our concerns by saying that a real hearing is listening to both sides, complaints and support,” according to the source who requested anonymity.

NO REST FOR THE WEARY

The SEC is being proactive, working fast and attacking each problem at its root, said Ms Ruenvadee.

The organisation routinely analyses other markets around the world, and changes its regulations in line with international standards when necessary.

The SEC plans to amend the SEC law to adapt to the changing market environment and prepare for a new financial industry driven by emerging digital assets, she said.

Ms Ruenvadee wants the regulator to play a role in resetting old ways of thinking among market stakeholders and hopes to achieve this through the regulatory guillotine process that promises to scrap burdensome regulation.

She pointed to a recent incident when a digital asset exchange temporarily shut down due to a surge in trading, noting that it was a good example of the problems arising when human brains interact with a digital world.

Certainly the odd hours digital asset exchanges operate could bring a higher cost of operation for organisations, she said.

The SEC celebrates its 30th anniversary in May of next year. The organisation has grown from 74 people in eight departments to over 700 across 33 departments.

Thailand’s SEC plans to host the IOSCO Annual Meeting in 2023, inviting securities regulators worldwide to discuss best practices and industry trends related to global securities and future markets. The SEC sees this as an opportunity to promote Thai markets as a regional power player.

“I would never have thought to apply for this position, if it had not been the first place I ever worked,” said Ms Ruenvadee. “The SEC is a deeply specialised organisation that needs specific knowledge in law and advanced financial know-how.”

It will take time for the SEC to take ownership of its role as an investigator of market violations, she said, meaning for the short term, the paper tiger moniker may stick among investors.

Cryptocurrency investors may have a very different perception of the SEC if it ends up restricting access to trading, with those barred from markets feeling the sharpness of the tiger’s teeth. 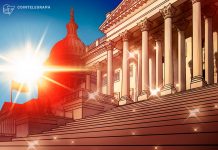 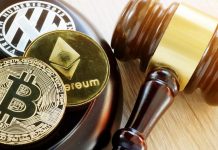 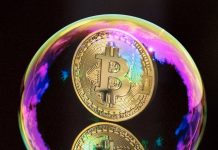 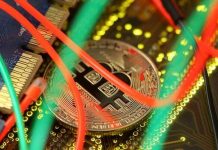 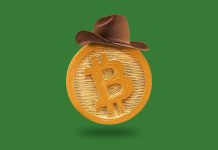 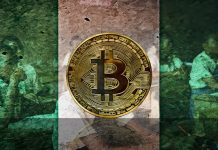