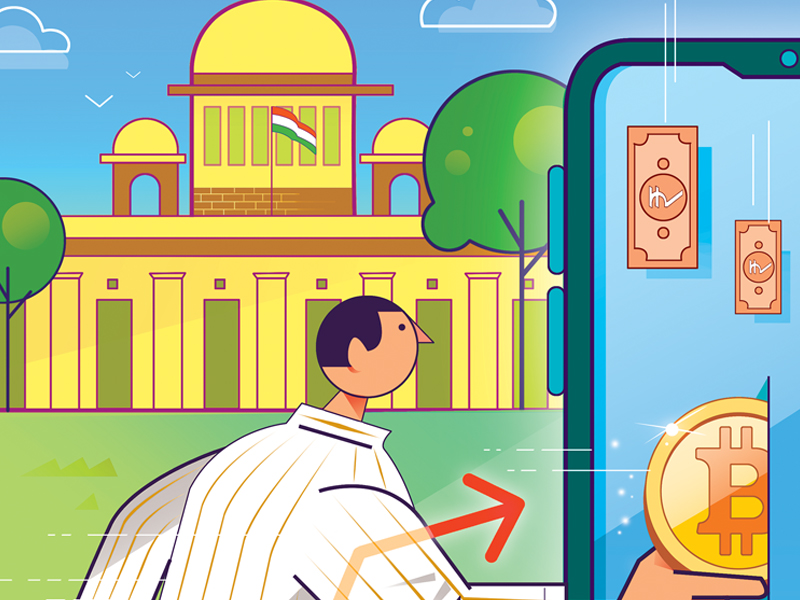 In March 2018, Sumit Gupta was readying himself for the launch of a cryptocurrency trading exchange that he had been toiling over for months. Crypto supporters would be able to buy and sell digital tokens like bitcoin and even exchange them for Indian rupees (INR) on his platform, CoinDCX. Banks were, of course, central to the model, just as they are when shares are bought and sold on stock exchanges.

But a week before the platform’s unveiling, the Reserve Bank of India (RBI) arbitrarily banned banks from dealing with crypto companies, making it impossible for investors to trade in crypto to INR pairs. “It completely shattered us and our round,” says Gupta, referring to the fundraising offers he had received from investors until then, including Flipkart’s Sachin Bansal, which all but dried up.

“Overnight we had to change our plans,” he continues. CoinDCX pivoted to a peer-to-peer (P2P) exchange where individuals holding digital tokens could trade them with others without exchanging fiat money. “We were India’s first P2P exchange,” claims Gupta. Three months after launching the platform, in June 2018, CoinDCX raised $3 million in Series A funding from Bain Capital in the US.

Other exchanges active in India at the time, including CoinDelta and CoinX, weren’t as lucky. Their trades dried up and investors vanished, forcing them to shut shop. Zebpay, one of the more popular crypto platforms, chose to fold operations in India and relaunch in Malta where crypto regulations were clearer. “The banking system was the lifeline of these exchanges. Imagine a stock exchange operating without banking services,” says Jaideep Reddy, a technology lawyer at Nishith Desai Associates.

Crypto supporters fought back. They challenged the RBI’s move with a lawsuit in the Supreme Court and won respite in March 2020 after a two-year battle. The apex court overturned the ban and banks were allowed to partake in cryptocurrency dealings. 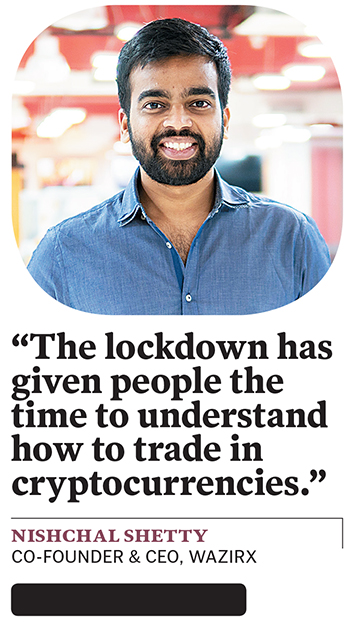 CoinDCX’s 1.2 lakh user base prior to March 2020 has been growing 10x every day since the banking ban was lifted, claims Gupta. And trading volumes have grown by 47 percent in the three months to June 2020. It also picked up another $2.5 million in funding led by Polychain Capital and Coinbase Ventures, the investment arm of San Francisco-based cryptocurrency giant Coinbase, in May 2020.
WazirX, another Mumbai-based cryptocurrency exchange that was acquired by Binance, a large Mauritius-based exchange, in November 2019, saw trading volumes go up by more than 50 percent in the last four to five months to hit $60 to 70 million a month, says co-founder and CEO Nishchal Shetty.

Globally too, the monthly trading volume between the Indian rupee and bitcoin more than doubled between March and August on Paxful, a major US-based cryptocurrency trading platform. The total trading volume in March was equivalent to $3.99 million, while in August it was $10.51 million, according to usefultips.org, a cryptocurrency information website.

“It’s clear that the demand is there,” says Hershel Mehta, an early stage investor at Mumbai-based Mehta Ventures, which invested in CoinDCX. “When you have a new asset class [bitcoin] that has over doubled in the past two years and sees rapid growth and liquidity, you’re going to see demand.”

Not only did the lifting of the RBI’s banking ban help in upping demand, but the pandemic also played its part, says WazirX’s Shetty. For one, salary cuts and job losses have prompted people to look for other income-generating avenues. Second, the lockdown has given them the time they previously never had to understand how cryptocurrencies work and how they can trade in them.

Not only did investors get a shot in the arm since the ban was lifted but so did crypto entrepreneurs. A handful of businesses have sprouted over the last five months. Bengaluru-based Tradehorn, for example, went live with its P2P exchange in June 2020. “We’ve been looking at this space since 2015, but there hasn’t been any clarity in regulation. Once the Supreme Court verdict was out in April, we started drawing up our plans,” says Rahul Vinakiya, founder and CEO. Already the platform has 100,000 users and completes ₹10,000 worth of trades per day.

While Tradehorn currently operates its own exchange, over the next two to three months, users will be able to trade on multiple exchanges using the platform. “The benefit is that users needn’t register and complete their KYC on every exchange. They can just do it on our platform and trade on any platform they like,” explains Vinakiya. 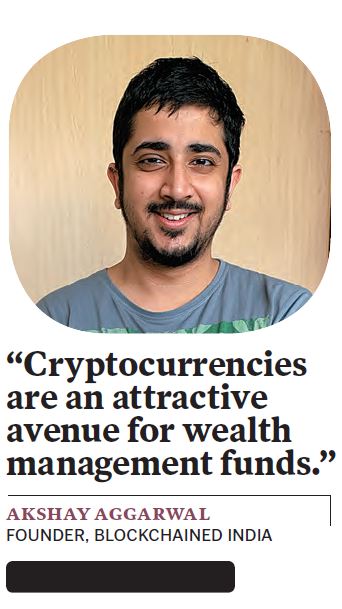 Similarly, Ashish Singhal launched CoinSwitch in 2017 when he realised that cryptocurrency prices differ from one platform to another. The Singapore-based, Sequoia-backed startup aggregates various exchanges which allows investors to compare crypto prices across platforms before making a purchase or sale. In June, at the height of the pandemic, Singhal decided to launch operations in India focusing on retail investors. “When the banking ban was lifted, we noticed there was a large unserved population of retail investors in the country. There was nothing that offered them a Swiggy or Uber kind of one-click experience when it came to cryptocurrencies,” he says. CoinSwitch Kuber, the Indian entity, set out to do that and within 100 days, it amassed 250,000 users and achieved trading volumes of $30 million per month. Seventy percent of these users are first-time crypto investors; 60 percent come from Tier 2 and Tier 3 cities and are under the age of 25. “Investing has always been a social experience. People buy stocks basis what people recommend otherwise there is a feeling of missing out,” says Singhal. “That same phenomenon has brought users from these cities into cryptocurrencies.” In the next three months he aims to reach one million users and grow volumes to $300 million.

Institutional interest in digital assets is also on the rise. Akshay Aggarwal, founder of Blockchained India, a 20,000-strong community of crypto enthusiasts that played a pivotal role in the lifting of the RBI banking ban through road shows and awareness campaigns, says Motilal Oswal contacted him to learn more about the space. “Cryptocurrencies are an attractive avenue for wealth management funds and they want to understand what they can offer their clients,” says Aggarwal. US-based companies are also eyeing the Indian market, he says. Just recently, he was involved in getting The OAN, a US-based blockchain company, to invest $10,000 in three idea-stage Indian crypto companies.

Surprisingly, the Indian crypto space is abuzz despite fears that a new law banning or severely restricting trade in cryptocurrencies is being mulled over by bureaucrats. The draft regulation bill is likely to be submitted to Parliament in November. So what explains this optimism, despite the looming uncertainty?

“The regulatory environment concerns me,” concedes CoinSwitch’s Singhal. “But news of the ban has been around for the last six months. I’m hopeful the government is looking at this from the right angle and will realise the contribution this industry is making to the economy,” he says. According to industry body Nasscom, which has been pushing for regulatory clarity on cryptocurrencies, India stands to lose much if a “proactive, consultative approach” is not taken. A ban would inhibit new applications and solutions from being deployed, would discourage tech startups and lead to job losses, it said. Bahrain, for instance, has been inviting Indian crypto players to set up base in the country by offering them various incentives and regulatory leeway. Consequently, India stands to lose billions of dollars worth of investment that the crypto sector can potentially attract.

Still others have a “plan B” in place. While Vinakiya of Tradehorn has been taking advantage of the opportunity in the Indian market, he concedes he is “mainly focussed on the global market”, especially Africa. “It’s a hedge against a sudden, arbitrary ban,” he says.

Meanwhile, CoinDCX’s Gupta has a long-term view of the market. “You can ignore cryptocurrencies today, but you can’t ignore them forever. The future is bright.” Currently he says 0.4 percent of India’s population or 52 lakh people trade in cryptocurrencies. Through CoinDCX’s educational platform DCXLearn to which Gupta has committed $1.3 million, he hopes to “get 50 crore Indians into crypto”. And he’s making it easy for them to do so through the “sachetisation of cryptocurrency”. His platform allows users to buy bitcoins for as low as ₹10 to start out with, going up to ₹100, ₹500 and ₹1,000. “The point is to learn while you trade,” he says.

Says Reddy of Nishith Desai, “There’s no clarity that there will be a ban. It’s not a foregone conclusion. It’s merely the recommendation of a committee consisting of four officials. A ban would make India an outlier globally. Also, if a ban is decided upon, it is subject to the parliamentary process, implementation hurdles, and constitutional challenge.” Besides, banning the trade will only push it underground. “You can ban businesses, but you can’t ban people from trading in crypto,” says one industry insider.

Others believe India might follow the route taken by other Asian countries. China, for instance, initially banned cryptocurrency trades and initial coin offerings in 2017, but has since reversed its stance. Similarly, Singapore and Japan had unregulated markets until the governments saw the potential of digital currencies. Today Singapore is creating new cryptocurrency indexes with the goal of setting the pricing standard for trading bitcoin and ethereum during Asia hours. “We risk being left behind if we don’t act fast,” says the insider quoted above.

Nasscom has called upon the Securities and Exchange Board of India to create a “regulatory sandbox” or a controlled testing environment for crypto firms, subject to certain regulatory relaxations. A well-established mechanism in several countries, a sandbox would give entrepreneurs a testing ground for their technologies and regulators the time to get up to speed with them. Says Gupta, “Cryptocurrencies are here to stay. It’s just a matter of time.”

Click here to see Forbes India’s comprehensive coverage on the Covid-19 situation and its impact on life, business and the economy​

(This story appears in the 09 October, 2020 issue of Forbes India. You can buy our tablet version from Magzter.com. To visit our Archives, click here.) 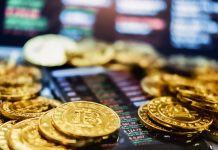 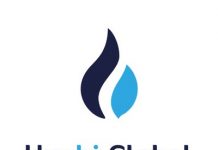 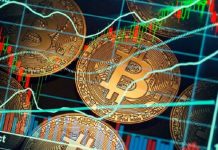 Fate of $2.3 billion worth of Bitcoins in Limbo 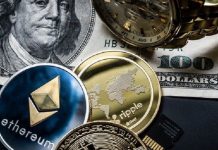