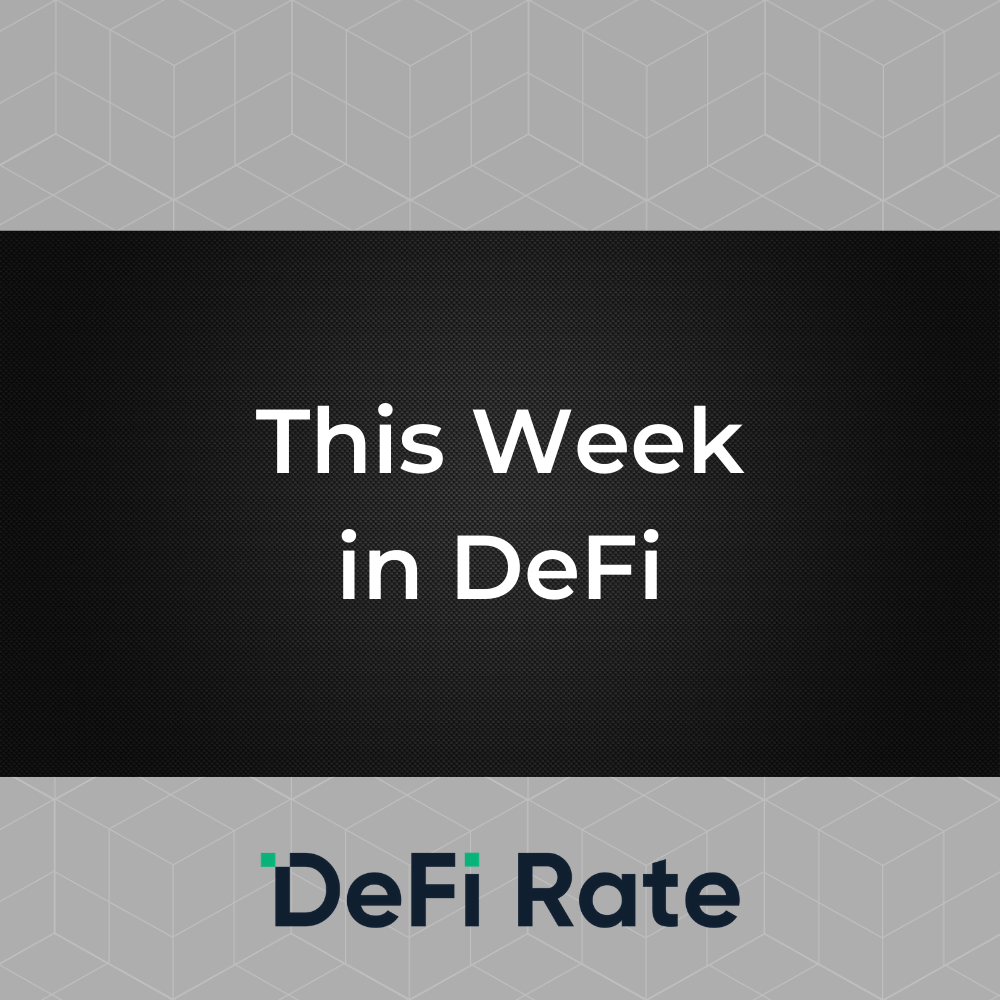 To Our DeFi Community,

Another exciting week in the world of DeFi.

This Week in #DeFi

Late last week, we saw MakerDAO elect to support WBTC as a collateral type featuring a 1% stability fee with a 10M debt ceiling. While many ETH enthusiasts are worried about the adoption of other assets into the Maker protocol – thus taking away from the value proposition of ETH as trustless collateral – the addition of WBTC may have negligible effects on the stability protocol. According to DeFi Pulse, there’s only ~$12M in WBTC currently circulating the Ethereum ecosystem. Given there’s well-over 100M DAI in circulation, WBTC can only service ~$8M in circulating DAI or less than 8% of the supply assuming the entirety of the circulating supply is soaked up by Maker at the minimum collateralization ratio of 150%. While both of these assumptions are unlikely, it does provide the “big picture” on the implications of WBTC in the Maker ecosystem. The irony here is that MakerDAO elected to support the consortium-wrapped version of BTC the same week that a trustless version of BTC – tBTC – went live on Ethereum main net. There’s already been a discussion to tBTC as a collateral type too. More to come on this in the coming weeks.

The other topical thing to note this week was the rise to prominence in personal token sales and the conflicting response from the DeFi community. While personal tokens provide a novel mechanism for users to tokenize and bet on the future on an individual’s success, many community members are reminiscent of the ICO Boom in 2017/18 when thousands of bad-acting entrepreneurs flooded to scene all in hopes to get rich quick. They don’t want it to happen again, and rightfully so. To that end, these token sales also raise a concern surrounding the legality of these offerings. There are definitely two sides to the argument and both have their case to be made. If you’re interested in the trending controversy of Social Finance (SoFi), you can read more about this in our article from earlier this week.

If this is what you think, you should definitely not be releasing your own personal token that’s 100% going to be classified as a security in many jurisdictions. The risk that @kermankohli is taking to raise $30k is absolutely not worth it https://t.co/UDFKlEetnp

The last thing to note comes from last week where IDEO CoLab Ventures published an article surrounding a new token distribution framework – the SAFG. In short, the SAFG proposes a simple, yet elegant token design where tokenized protocols can distribute tokens to their users that represents future governance rights. What’s interesting about this framework is that, initially, tokens will be non-transferable and have zero economic rights. It’s simply a way to get future governance power into the hands of the people that matter – the users. Moreover, this framework effectively allows you to launch a token project in virtually every jurisdiction given the economic restrictions. That said, over time, there’s nothing stopping protocol voters from electing to lift or change the restrictions via a decentralized governance process in the future.

This is the elegance of the design. Build a protocol or application, get users, easily distribute tokens to them, and then eventually empower those tokens with value accrual mechanisms upon the emergence of decentralized, sustainable governance. It’s an interesting framework and we’re already beginning to see it rise to prominence with Compound and FutureSwap following this model. We’ll keep you updated on this framework as more projects look for the most effective ways to distribute tokens to their community in the coming future.

With that – let’s dive into lending rates!

Another week and the Dai Savings Rate is still at 0%. It’s fairly apparent now that the DeFi ecosystem is in a low-yielding lending environment until the DSR comes back online to act as the “risk-free” rate (even though it’s not risk-free) for the lending market as a whole. However, it seems that dYdX has seen a nice uptick in Dai rates as they now offer 3.17% APY – up from its 30D average of 2.38%. The second-highest yielding opportunity is Aave. The rising money market protocol is continuing to see more and more adoption as value locked reaches new highs. In terms of Dai lending rates, they’ve remained rather steady over the past month – offering a steady 2.75% APY on Dai deposits. Other lending protocols include Nuo and Fulcrum which offer similar rates of 1.15% and 1.11%, respectively. The last lending protocol is Compound. While Compound still leads in terms of value locked, the protocol offers the lowest lending rates for Dai out of any other platform – a mere 0.78% APY. With Dharma‘s recent governance proposal passing, we expected to see a nice uptick in interest rates. However, with the lending pool’s utilization rate sitting at 60%, the effects so far have been negligible.

US crypto bank – BlockFi – continues to dominate the field in terms of USDC lending rates. One of the benefits of centralized lending banks is the ability to set your own rates. As such, BlockFi has been completely resilient to the low-yielding lending environment that we’re currently in as they offer an attractive 8.6% APY for anyone willing to deposit their USDC into the lending provider.  The other notable crypto banks offering high-yielding rates on USDC deposits include Poloniex which offers 5.4% to depositors. It’s important to note that relying on a centralized provider may inherently present more risks for DeFi users, which is apparent in the lending rates offered relative to open financial protocols. To that end, the highest yielding DeFi protocol for USDC deposits is Aave, offering 3.42% APY (over half of BlockFi’s). This is followed by Nuo who offers a comparative rate of 3.1% APY. Next is dYdX and Fulcrum which yield 1.31% and 1.29%, respectively. Similar to Dai, Compound is currently offering the lowest rates in the field with a mere 0.52% APY on USDC deposits. Per usual, Coinbase – the issuing entity – continues to offer 1.25% per annum for anyone who elects to hold the fiat-backed stablecoin in their application.

The money markets protocol teased its upcoming upgrade at the Ethereal Summit on Thursday.

The leading DeFi protocol announced to support a version of BTC as a collateral type for Dai.

IDEO CoLab Ventures rolled out a new governance framework for distributing tokens to the community without economic incentives.

Strike Protocol announced their approach to offering 20x leverage on Ethereum-assets with an alpha intake form.

Thanks for subscribing to This Week in DeFi. All of our content is free and publicly available, so feel free to share it!