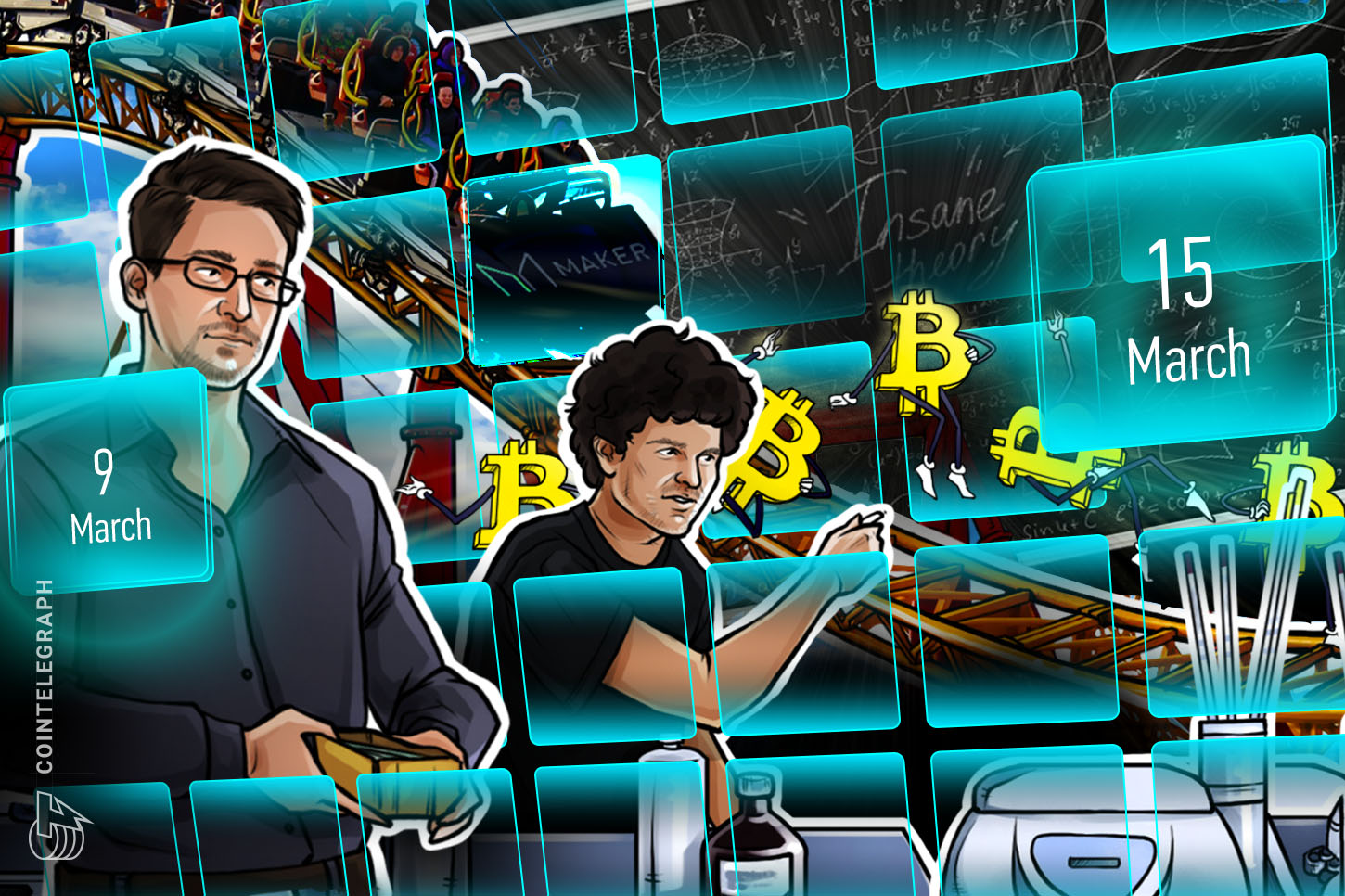 Coming every Sunday, Hodler’s Digest will help you track every single important news story that happened this week. The best (and worst) quotes, adoption and regulation highlights, leading coins, predictions and much more — a week on Cointelegraph in one link.

Whenever there’s a big crash on the stock market, traders on Wall Street are often pictured with their heads in their hands — surrounded by a sea of screens with red numbers. This week, it was crypto’s turn. Bitcoin prices had been relatively stable in the high $7,000s at the start of the week… then Thursday happened. BTC dramatically fell by 17% in the space of an hour — taking it below $6,000 for the first time since May 2019. Hours later, BTC was under $5,000. But the sell-offs were far from over. Later that evening, BTC slumped to $3,637 only to rebound above $5,200 within minutes. The meltdown means that, at the time of writing, Bitcoin is down 33% compared to where it was last Sunday. Analysis from Keith Wareing suggests there are reasons to be optimistic: True hodlers are unfazed, newcomers can enter the market at lower prices, and catastrophic sell-offs are now much less likely. The carnage also means the number of people owning 1 BTC has hit a new record. More than $50 billion has been wiped off Bitcoin’s market cap over the past seven days. Uncertainty surrounding the ever-worsening coronavirus pandemic means we could end up waiting a while for a bounceback.

Of course, Bitcoin isn’t the only cryptocurrency that’s been having a bad week. Thursday also saw ETH prices take a beating — and this was especially problematic for the decentralized finance community. MakerDAO briefly explored the prospect of an emergency shutdown after the crash left millions of dollars in debt under-collateralized. Voting is now underway to determine how the lending protocol should tackle this crisis. Despite the “perfect storm,” many executives in the DeFi community remain confident in the ecosystem. Some believe that harsh lessons will be learned as a result of the crash, with InstaDApp CEO Sowmay Jain saying: “Such painful times remind us that we are extremely early in the space, and there’s still lots of room for improvement.”

Earlier in March, a controversial ban that stopped banks from offering services to crypto-related firms was overturned by India’s Supreme Court. If you thought this would be the end of it, you were badly mistaken. This week, lawyers claimed that certain financial institutions are still arbitrarily denying to process crypto-related transactions. It seems these domestic banks are waiting for further confirmation from the Reserve Bank of India — which instigated the ban in the first place and is planning to appeal the ruling. It’s also possible that the country’s parliament will revisit a proposed law that would see anyone caught dealing in cryptocurrencies will face up to 10 years in prison. Sadly, it doesn’t seem like there is going to be a happy ending for India’s crypto community anytime soon.

BNP Paribas is apparently blocking customers from sending funds to Coinbase, a major crypto exchange. The French banking giant’s restrictions seem to have come into force over the past week — and transfers to other crypto trading platforms appear to be taking place as usual. A source told Cointelegraph that Coinbase is considered an “illegal operation,” and the restrictions look like they were imposed with very little notice. Fraud, malware, scams and the anonymous coin Monero were among the factors that led to the decision.

Bitcoin miner stumbles upon $8 million stash from 2010, sells before crash

In a week of doom and gloom, it’s worth ending our news roundup on a high note. A former Bitcoin miner has stumbled upon an old wallet that contained 1,000 Bitcoins, which also included myriad forks. It’s believed that the BTC was mined a long time ago, and the wallet.dat file was recently found on a USB stick. The lucky miner, identified on Reddit as “whoamisoon,” had turned to Reddit on Tuesday for advice on how the coins could be moved onto an exchange — and later that day, 1,000 BTC appeared to be making their way to Coinbase. A post on Thursday suggested that whoamisoon managed to liquidate everything before prices crashed. Whoamisoon wrote: “Thank you all for all the suggestions. It was overall a great return and the best welcome one can get!” 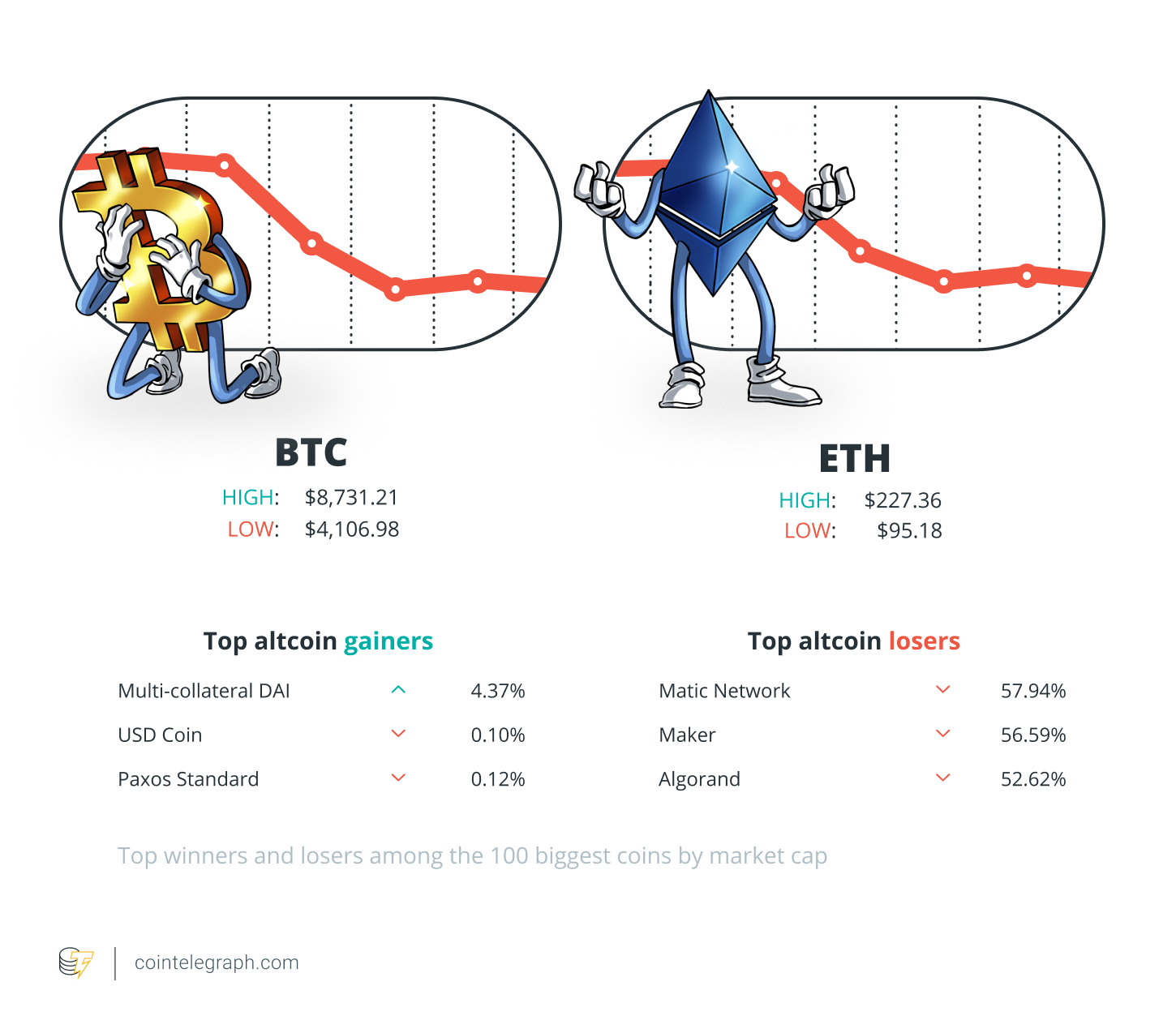 For more info on crypto prices, make sure to read Cointelegraph’s market analysis.

“The MakerDAO had a +$500K surplus before the price drop and now has a -$4M surplus that needs to be filled.”

“We are in the middle of a revolution in payments. Banknotes — the bank’s most accessible form of money — are being used less frequently to make payments.” 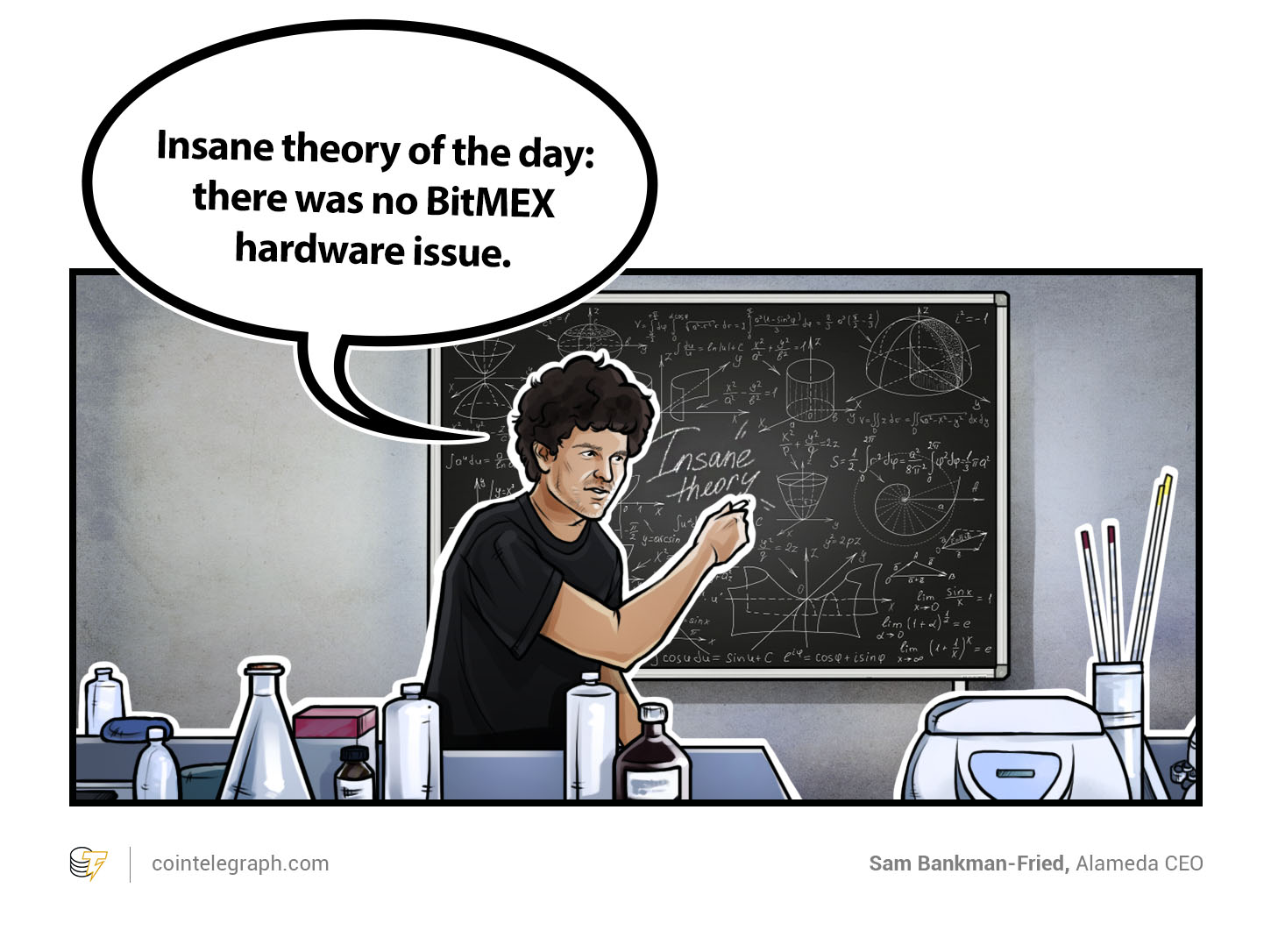 “Insane theory of the day: There was no BitMEX hardware issue.”

“Banks’ refusal to provide services for the sale/purchase of crypto assets is absolutely illegal, unjust and arbitrary in the eyes of the law and the same amounts to wilful disobedience to the order of the Hon’ble Supreme Court.” 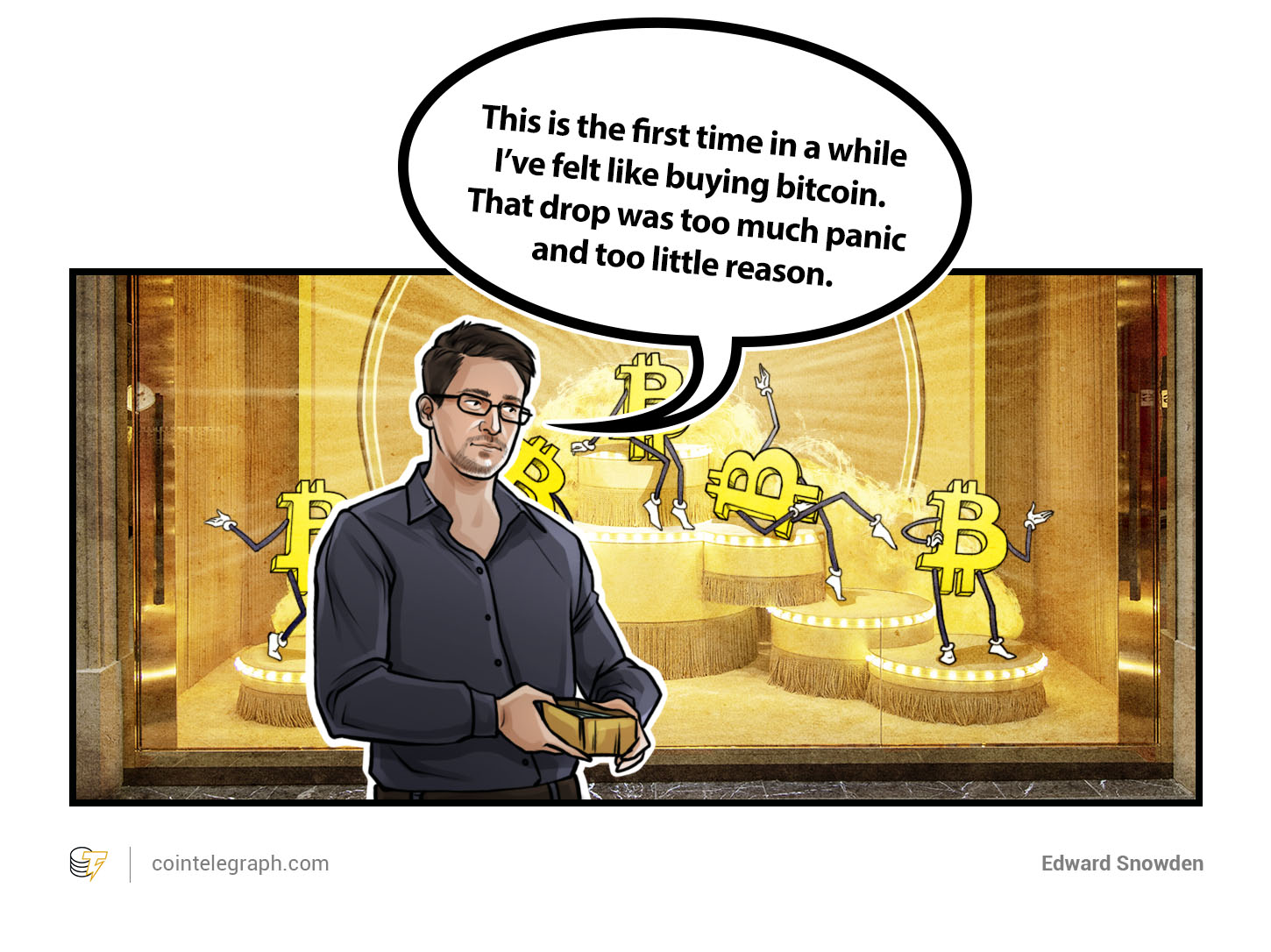 “This is the first time in a while I’ve felt like buying bitcoin. That drop was too much panic and too little reason.”

Prediction of the Week

In the aftermath of Bitcoin crashing below $4,000, one experienced market analyst had an alarming prediction that the worst may be yet to come. Peter Brandt — who is famous for correctly predicting the market crash from the all-time high — said the new bottom is potentially “sub-$1,000” if he interprets BTC charts without bias. That would be a fall of more than 80% from their current level. Brandt is no crypto skeptic, and he often makes predictions that are more bullish than bearish. In the past, he’s suggested that parabolic increases in BTC charts could see it hit $140,000. His latest analysis will be something that many in the crypto world don’t want to hear.

FUD of the Week

A judge has attacked Craig Wright for producing forged documents and giving a perjured testimony. The self-proclaimed Satoshi Nakamoto has been fighting a ruling that is forcing him to hand over more than 500,000 BTC to the family of Dave Kleiman, his late business partner. Judge Bruce Reinhart has questioned Wright’s credibility and said during a hearing: “I give no weight to sworn statements of Dr. Wright that advance his interests but that have not been challenged by cross-examination and for which I cannot make a credibility determination. I have previously found that Dr. Wright gave perjured testimony in my presence.” Wright is under pressure to provide documentation detailing how many Bitcoins are held by the so-called “Tulip Trust.”

BitMEX denies it made Bitcoin price drop to $3,700 after going offline

The crypto crash was bad news for BitMEX. During frenzied trading activity as prices fell off a cliff, the exchange faced unexpected downtime. This sparked rumors of foul play, with BitMEX officials rejecting the allegations as a “conspiracy theory.” The outage meant the company’s services suffered disruption between 2:16 a.m. and 2:40 a.m. UTC on Friday — minutes after BTC prices had suddenly tanked below $4,000. BitMEX says a “hardware issue with our cloud service provider” was the reason requests were delayed.

A blockchain forensics firm has published a detailed analysis of how two Chinese nationals linked to North Korea laundered stolen cryptocurrency worth tens of millions of dollars. According to CipherTrace’s findings, the pair are believed to be associated with the Lazarus Group — cybercriminals who were responsible for 2014’s Sony breach and 2017’s WannaCry ransomware epidemic. The United States Treasury’s Office of Foreign Assets Control has added Tian Yinyin and Li Jiadong to its list of sanctioned individuals. It is believed “peel chains” were used to obfuscate the size of funds being deposited to any given wallet.

Zooko’s Triangle: The human-readable paradox at the heart of crypto adoption

Fintech in the United Kingdom after Brexit

Because of the coronavirus, many have lost sight of major issues such as Brexit. Thankfully, Sarah Hall hasn’t. Here’s her look at how the financial technology sector may change after the U.K.’s transition period ends on Dec. 31.

A court in France has ruled that Bitcoin is a fungible, intangible asset — sending ripples through the crypto community. Is this an important milestone for further development in the crypto market? Andrew Singer finds out.

When is it, where is it, dates, tickets, schedule and sessions