Keynes tried to analyze the behavior of rational people in the market by using a comparison with a fictional newspaper contest, in which people were asked to choose the most beautiful faces from a large selection of pictures. The people who would choose the most popular faces would receive a price.

There are a couple of possible strategies for the participants here, with different levels of sophistication:

Like this, you can go many steps further. According to Keynes:

“It is not a case of choosing those [faces] that, to the best of one’s judgment, are really the prettiest, nor even those that average opinion genuinely thinks the prettiest. We have reached the third degree where we devote our intelligences to anticipating what average opinion expects the average opinion to be. And there are some, I believe, who practice the fourth, fifth and higher degrees.” (Keynes, General Theory of Employment, Interest and Money, 1936).

Keynes theory was that comparable behavior is at work in the stock markets. On the short term, shares are not priced by what people think their value is, but by what they think everyone else thinks their value is.

Areas for application of this theory

This theory is very interesting and understandable: In the year 1936 people often had to trust on limited information with regard to the stock markets. Nowadays we live in a period of information overload where financial details of almost every listed company can easily be found on the internet. The applicability of this theory might be more limited nowadays than in the past, with a few notable exceptions:

I will not go into the first two in this article (you can click the link in short term trading for a scientific analysis about this), but focus on Bitcoin here. You could also argue that assets like fiat currency or gold have an intrinsic value which is difficult to calculate, but these assets are heavily institutionalized so I think the theory is less applicable to them.

In one of my previous articles I argued that the intrinsic value of Bitcoin is the representation of the effort it takes to mine it. This effort which can both be measured in energy necessary for the computing power and effort used in setting up the installation, which has led to the enabling of a worldwide payment network.

Compared to for instance companies which produce physical goods or real services, the intrinsic value of cryptocurrency is difficult to measure: if you would have asked someone 12 years ago what price they thought a Bitcoin is worth, purely based on its technological features and its supply, you would get very different answers, most likely around the value of $0. 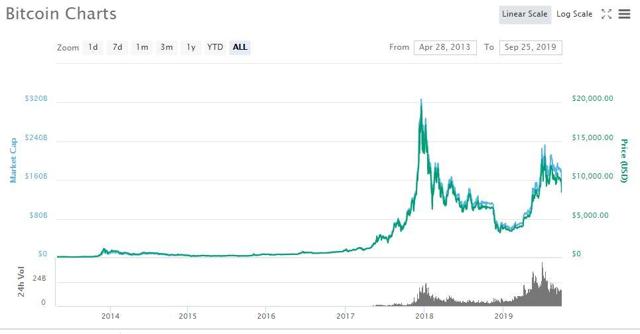 Over the years as more people got to know Bitcoin, this question was asked time and time again. People went from answering it by using level 1 (what do I think the value is?) to level 2 and 3 (what perception does the general public have of the average opinion about the value?), and likely even deeper. This can explain the sometimes seemingly irrational price behavior of Bitcoin during the last decade.

Side note: Note that with a higher adoption rate of Bitcoin, its intrinsic value also grew. This is because a more extensive financial network has more value than a very limited small network. But this only explains why the price rose over time, not why there were so many and large price fluctuations.

As long as the value of Bitcoin remains difficult to quantify for people, price fluctuations will continue to depend to a large degree on the sentiment, not on objective values.

For example, with Bitcoin and for stocks, psychological price barriers like the $9,000 which was broken recently work the same: for an individual, it’s just a value. But since people think other people think this is a significant level, these boundaries can become important and might trigger large price movements such as saw in Bitcoin.

The next time you hear about a large price movement in Bitcoin, this theory might explain a large part of it.

Disclosure: I/we have no positions in any stocks mentioned, and no plans to initiate any positions within the next 72 hours. I wrote this article myself, and it expresses my own opinions. I am not receiving compensation for it (other than from Seeking Alpha). I have no business relationship with any company whose stock is mentioned in this article.

If Bitcoin Fails, Crypto Industry in for a Bad Time: Cardano Founder