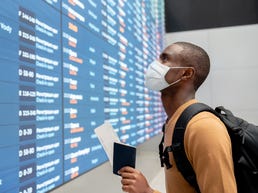 Troy Wiipongwii, the director of the William & Mary Blockchain Lab, has paid for several flights and hotels with cryptocurrency. Most recently, he booked a flight from Newark to Toronto on Air Canada using bitcoin.

“This process isn’t much different than paying with a credit or debit card,” he says. “When you log in, you have a wallet, and you can make a purchase from the wallet.”

Cryptocurrencies like Bitcoin, Dogecoin and Ethereum aren’t just for investing anymore – if you have the stomach for it. You can book airline tickets or hotel rooms and pay for restaurant meals with crypto. There are advantages and disadvantages to using a digital currency – and one benefit that almost no one is talking about.

Bitcoin is ‘making inroads’ in travel

Sloan says many travel companies are dabbling in crypto, from the travel site GetYourGuide to the Bobby Hotel in Nashville, which accepts Dogecoin and other cryptocurrencies.

A survey earlier this year by Travala.com concluded that 22% of American travelers plan to use cryptocurrency to pay for part of their next trip. In the second quarter of 2021, the latest period for which numbers are available, 70% of the nearly $10 million in bookings made on Travala.com used cryptocurrency.

“The number of bookings using crypto has steadily risen month over month to record highs, even during the pandemic,” says Juan Otero, Travala.com’s CEO. “It’s a sign that more people have crypto, and they want to spend it on travel.”

Web search statistics suggest he’s right. In June 2021, there were 3,200 searches for keywords related to travel and cryptocurrencies, compared to almost none a year ago, according to Similarweb, a web analytics company. It’s a “niche” area of interest, says Alisha Kapur, a travel industry consultant at Similarweb.

Who lets you book a trip with bitcoin?

Among the early movers in crypto payments:

Airlines. In 2014, Latvia’s flag carrier, airBaltic, became the world’s first airline to accept payments in bitcoin. Since then, several other airlines have joined the crypto revolution, including LOT Polish Airlines and Virgin Galactic.

Hotels. For the hotel industry, cryptocurrency is still a fringe payment method. The luxury hotel brand Kessler Collection recently announced it would accept Bitcoin, Dogecoin and Ether, among other payment methods. Kessler’s hotels include the Beaver Creek Lodge in Beaver Creek, Colorado, and the Elliot Park Hotel in Minneapolis.

Advantages to using cryptocurrency for your next trip

For travelers, the biggest advantage of using cryptocurrency is avoiding foreign exchange fees. If you’ve ever been abroad, you know the racket: You have to exchange your dollars for another currency, often paying an exorbitant fee or dealing with an unfavorable exchange rate. Cryptocurrencies eliminate a lot of those problems.

“A Bitcoin ATM machine might let you convert your dollars to Bitcoin at a gas station in Pennsylvania – and then convert it to euros in France,” explains Bryan Routledge, an associate professor of finance at Carnegie Mellon University’s Tepper School of Business. He says you may reduce or completely avoid any fees, which will save you money.

Cryptocurrencies also offer some price stability in countries where currencies are unstable.

But while countries like El Salvador have embraced cryptocurrencies, others have banned them. Algeria, Bolivia, China, Egypt, Nepal and Vietnam don’t allow you to use Bitcoin for your purchases, according to Wang. And it’s currently a gray area in countries like Russia and Pakistan, where it isn’t banned but it isn’t accepted as payment, either.

Unfortunately, cryptocurrencies can be volatile, too. And that’s one of the biggest disadvantages of using a digital tender. Your bitcoin and Ether can pay for an airline ticket one day, but the next day they might only buy you a restaurant meal.

Also, there are virtually no consumer protections when you pay with a cryptocurrency. Unlike credit cards, which allow you to dispute certain charges under the Fair Credit Billing Act, you have no such rights when you pay with crypto. The Federal Trade Commission received so many complaints from consumers that it issued a warning a few years ago about paying with bitcoin.

Oh, and that part about booking with cryptocurrency being easy – it’s not true for everyone.

For some bookings, the user experience “can be highly technical and requires a good deal of confidence,” says Pedro Renaud Anderson, chief operating officer of Winding Tree, a blockchain company that specializes in travel. “Booking a trip with crypto is still pretty gimmicky and provides very little true value for the passenger.”

Also, he says the sites that accept cryptocurrencies often charge more than those that don’t.

The best reason to book your next trip with bitcoin

You have to weigh the pros and cons of booking a trip with Bitcoin before opening your digital wallet. More people are doing it now than ever before. But the best reason to pay for your next flight, hotel or tour with cryptocurrency is that if enough people do it, it could upend a badly broken system.

Imagine a world free of credit cards, where you have to pay ridiculous fees to access your own money, and where we’re no longer slaves to a loyalty program. Digital currencies promise to end a system that has forced half of America deeper into debt while enriching a select few who learned to game the points and miles programs. Isn’t it time we freed ourselves from those shackles?

► Is it time to give up your travel loyalty programs?  The case for keeping or cutting up your cards

Tips for booking your next trip with cryptocurrency

How to get your hands on crypto. Check out a cryptocurrency exchange like Binance, Coinbase or Gemini. If you have a PayPal account, you can buy Bitcoin, Ethereum, Litecoin and Bitcoin Cash.

What to do about your rewards. New blockchain technology will “tokenize” rewards, turning them into a form of digital currency. You can cut up your credit card and stop worrying about that ridiculous annual fee. “Tokenizing rewards programs will have a big impact on increasing the flexibility and security of loyalty programs,” predicts Sloan of Future Tech Software Labs.

What to do if they don’t accept bitcoin. If your favorite airline or hotel doesn’t take crypto, give it a few months. “Major travel industry companies and services to begin looking more at accepting cryptocurrency as payment in the future,” predicts Andrew Hacker of Harrisburg University of Science and Technology.

Are Bitcoin Prices Headed For Further Losses In The Short-Term?