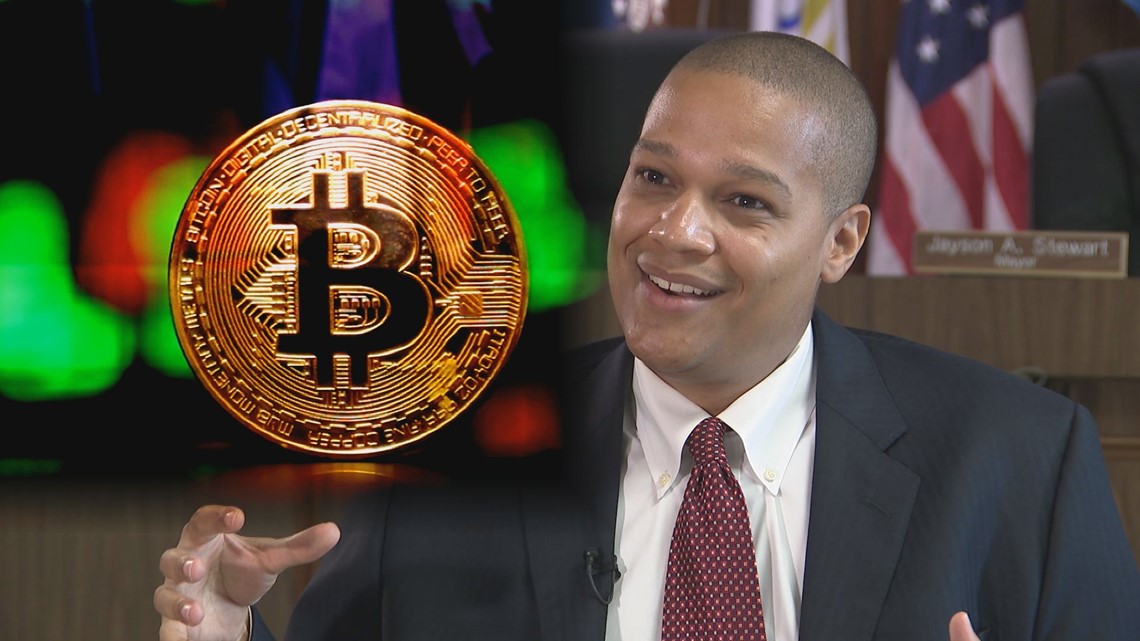 Cool Valley Mayor Jayson Stewart is raising funds to give each resident up to $1000 in Bitcoin. The only catch? They can’t sell it

COOL VALLEY, Mo. — A tiny Missouri town could become the first in the country to put Bitcoin in the hands of every resident.

Jayson Stewart, the Mayor of Cool Valley says he is raising funds to give each of the town’s roughly 1500 inhabitants a piece of the digital currency.

Many experts expect Bitcoin to grow in value exponentially in the next decade.

“My daughter says she thinks it’s the next big thing. The digital currency,” said Ramona Nickels, a mail carrier who lives in Cool Valley.

“Look, it’s digital gold,” said Mayor Stewart. “I would like to see every single household in my city receive some level of Bitcoin, whether it be $500 or $1,000.”

So what is Bitcoin?

Bitcoin is one of many cryptocurrencies available today.

It is considered the most well-known cryptocurrency. Bitcoin has been around since 2008.

Think of Bitcoin like regular money. Except it’s not issued by any country or impacted by traditional inflation.

You don’t need a bank to use, store or transfer Bitcoin. It’s completely online. Some economists believe if Bitcoin’s value keeps increasing at its current rate, it could one day become the world’s currency.

Recently, El Salvador became the first country in the world to make Bitcoin it’s legal tender. It was a move made to protect the country’s economy from rapidly rising inflation.

In Cool Valley, Stewart thinks holding the digital currency could be transformational.

“I have friends whose lives have been completely changed, like going from working a regular nine to five job to being worth over 80 million dollars in a matter of a few years,” said Stewart, who calls himself an Entrepreneur and Environmentalist.

Stewart said most of the money to fund the plan will come from several unnamed Bitcoin investors.

“I have some very supportive donors who have agreed to match any money that I raise up to several millions of dollars,” said Stewart. “I’m trying to get a few government funds as well to go along with that. Or potentially some of the relief money that comes in from the Covid relief.”

Save it, don’t sell it

Stewart says the Bitcoin will come with some strings attached. He doesn’t want residents to sell for a few years.

“We’re putting in place like a vesting schedule for Bitcoin. The idea is that maybe you don’t touch it for five years before you really get full access to it. We’re working on ideas like that because that’s my number one concern. Someone just sells their bitcoin to pay their car note. And then when Bitcoin is sitting at like $500,000 all these years later, they’re going to really regret that,” said Stewart.

Roughly 1500 people live in Cool Valley. The dozen or so the I-Team spoke with seemed receptive to the plan.

“With cash people have bad habits and they buy things they shouldn’t be buying. But with Bitcoin, maybe you can give it to your kids. My daughter is going to college next year. I could give [the Bitcoin] to her,” said Nickels.

“Putting money in my pocket! Sounds pretty good to me,” said Cornelius Webb, who lives in Cool Valley.

“I believe that Cool Valley is going to get wealthier and wealthier , not just our city, but the actual people who live here,” said Stewart.

Stewart said the city is also going to take proactive measures to off set the environmental impact Bitcoin mining is known to have.

“We’re giving away Bitcoin and at the same time we’re converting our entire city to solar, like all of the government lights and things like that,” said Stewart.

Details about how Bitcoin will be distributed are still unclear.

Stewart said it will involve door knocking and offering free classes to residents about how to use and securely store Bitcoin. He hopes to kick things off by the end of the year.

The next Bitcoin? Crypto millionaires backing this controversial commodity